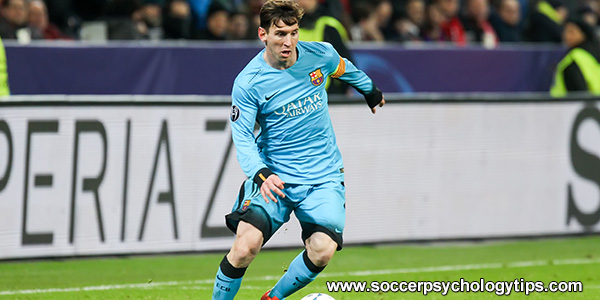 How to Improve Your Consistency in Soccer

That is a phrase every soccer coach has mentioned but the message is often misunderstood by players.

What do coaches mean when they refer to “doing too much” and how does it affect a player’s performance on the field?

The misunderstanding among players is that many confuse “don’t try to do too much” with “not trying” or giving less than 100 percent effort.

Coaches are not suggesting that you give less than your full effort.

Rather, your coach is instructing you to FOCUS on your role on the team, play smart within yourself, and stick to the game plan.

For example, if you are a defender… your role is to defend and not to dribble the ball the length of the field trying to score.

If your team is down three goals in the second half, focus on the half-time and focus on the play in front of you.

If you are on the attack, rather than trying to score from 20 yards out, work the ball into the box. Instead of taking on two defenders, make the extra pass.

“Trying to do too much” has several negative consequences…

Mentally, “trying to do too much” takes your focus away from seeing the whole field and making the intuitive play. It leads to over thinking.

Also, trying to do too much increases pressure you put on yourself, causes you to overthink your game and expends unnecessary amounts of mental and physical energy.

The best option on the pitch is to “play within yourself.”

What is meant by “play within yourself”?

Playing within yourself is a matter of knowing what your role is each game and playing to your strengths and skill set.

A good example of “playing within yourself” is Chad Marshall of the MLS Seattle Sounders.

Marshall is in his 15th MLS season and he is a two-time Defender of the Year.

Marshall has been dominant and consistent in his play anchoring a Sounders back line that has conceded the fewest goals (26) in the Western Conference through 24 matches.

Marshall is the most decorated defender in league history and is a candidate for another Defender of the Year award.

Marshall’s key to consistency is his ability to play within himself and know his role of the team.

MARSHALL: “I just try and win the ball and get it to the good players who are technical and can do fun stuff with it. I just head the ball and do little reach-around taps and pass it to the [attackers of the team].”

Marshall’s success has come by way of simplifying his role.

If you adopt Marshall’s approach and simplify your role, you can focus all your energies on being a peak performer and increase your productivity on the field.

A Tip for Becoming a Consistent Peak Performer

A great strategy to “play within yourself” and become a consistent and proficient soccer player is to define your role.

To define your role, complete the following statement, “My role is to…” Be specific but succinct.

With a laser focus on your role on the field, you will improve your play significantly.

For more strategies to boost consistency in your soccer performance, check out our audio and workbook program, “Soccer Confidence”: