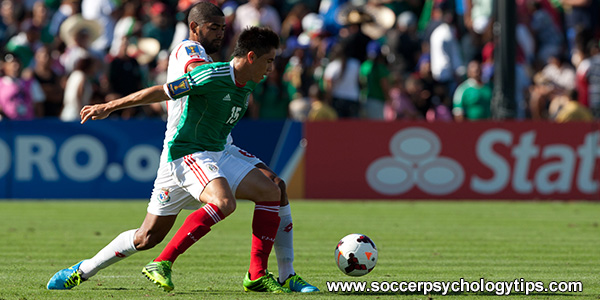 How To Improve Your Mental Game in Soccer

The England soccer team has longstanding success throughout history.

Many previous teams have seemed to carry the weight of past success and pressure from expectations to perform a certain way. Though, this England soccer team appears significantly different.

Much of the credit for this change has gone to manager, Gareth Southgate and the sport psychologist, Pippa Grange.

England midfielder, Dele Alli was asked about his mentality before their semi-final game against Croatia.

His response: “Excited, not nervous.”

Alli said his team is now playing “hungrier” and humbler, and more light and joyful. He also commented that Southgate speaks a lot about “writing their own stories… to believe what is possible and not be hindered by history or expectations.”

The England soccer team has been working hard with Southgate and Grange over the past year to build their own team and change their mentality.

“I think a lot of the work that we’ve done with her (Grange) has been prior to the tournament starting, over the last six or seven months.”

Much of the work Grange does with the England soccer team is centered on team-building; enhancing trust among the group. She gets the players to “sit down together in a small group and share their life experiences and anxieties and reveal intimate truths about their character and what motivates them.”

Southgate, who works with Grange on the team’s mental game says the point of this is “to build trust, make them closer, and improve their understanding of each other.”

Grange also encourages the athletes to get off their phones, play games with each other (like an inflatable unicorn game in the pool after their win against Tunisia), and interact outside of the field.

The more players relate and learn about one another, the closer they become, the more value they feel, and the more trust they build among the team.

Value and trust are crucial for a team’s overall success.

In addition to value and trust between teammates, a strong mental game is heavily influenced by your view of situations and challenges.

In regard to challenges and adverse situations, Barton commented:

“Often, it’s the spin you put on things. Emotions can be reframed, as with Alli saying he was excited rather than nervous.”

In the past, Barton has worked with other England soccer players and they would talk about and dread taking a penalty, like it’s the worst thing ever.

BARTON: “We create this narrative in our heads and live it. It helps to rethink the penalty as an opportunity instead of a threat. The team is playing with freedom; there’s no fear of failure. Fear is essentially made up because it is a projection into the future, where you have created a narrative of something going wrong. We all do it, and we get very good at creating the negative rather than the positive.”

He says that instead, “We should visualize what we need to do to perform, rather than the fantasy result. The skill is in your application to a task because that’s the bit you’re in control of. Say you have a big presentation to do, or a big event, or job interview – if you’re feeling fear you’re already mentally rehearsing it in a negative way. With mental rehearsal, you prime your brain to play it how you would like to be. You might want to be confident, speak clearly. It’s not just positive thinking.”

To assist with focusing on your task at hand and controlling what you can control; Barton references the significance routines can play.

He says: “Routines can be useful. If you watch Harry Kane, if he’s interrupted before a penalty kick, he starts again – he picks the ball up and puts it down on the spot and goes through his whole routine again, and that’s something I’ve never seen England players do before. They usually want to get it over with as quickly as possible, but fear causes us to do things that are unhelpful. Routines help to keep us in the moment, focused and in the right frame of mind.”

Another technique the England soccer team uses to help with consistent performance is a reflection.

Noting the positives and negatives after a practice or game.

Kate Hays, head of psychology at the English Institute of Sport, expressed: “The reflection component is critical. It allows people time and space to work through that [negative] emotionally and be able to go back to what happened, to process it and be able to move on.”

She also said that learning to view failure as having potentially positive consequences in the long term is advantageous. “Overcoming difficult situations and building resilience potentially contributes to success.”

Additionally, Grange commented on her perception of failure:

“I think failure is really useful. For without failure we cannot progress longer, higher or faster. It’s a funny paradox – our successes are achieved through trying and trying most often ends in failure. Every day in our general lives and our sporting lives we will win some and lose some; it’s just part of the way life should be. It could be missing out on a promotion, being pipped at the line in a running race or bombing out in an exam – it doesn’t matter – the important lesson is to learn from our failures, reassess, rethink, move forward (sometimes in a different direction) and keep those dreams and goals alive.”

The England soccer team has had great success in the past year, and they acknowledge much of that to their new mindset.

There are six lessons from this squad that we can all use in our sport and throughout life:

These are just a few strategies to start using in your sport to improve your mental game and overall performance.

For more information on improving your mental skills for soccer, please check out our audio and workbook program “Soccer Confidence”: