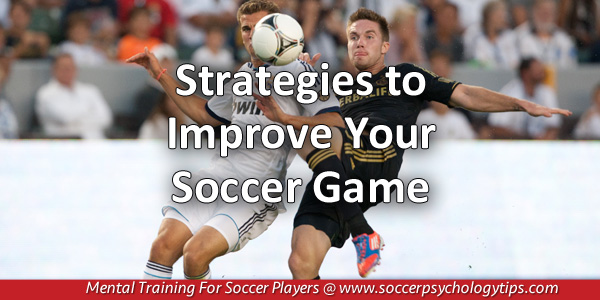 Making a travel soccer team, breaking into the starting lineup, or playing in a more competitive league can be a daunting task for many soccer players.
Playing against tougher competition can cause you to question your abilities, “Am I even capable to play at this level? Do I really belong here?”
If you want to be competitive at a higher level, you need to be mentally tough and that starts with confidence.
Maybe you can relate to the experience of Johnny C., a Division II freshman playing on a collegiate team that won the conference championship the previous year…
Johnny was a star on his high school team and received many accolades and awards throughout his career.
Johnny had a great college tryout and made the team with ease but did not immediately break into the starting lineup.
In pre-season games, Johnny continued to play strong coming in off the bench.
Prior to the first game of the season, Johnny’s coach pulled him aside and told him that he would be the starter in the opening game.
Even though Johnny earned the role as the starter, he had doubts as to whether he could compete at the collegiate level.
The players in college were stronger, faster and much more talented than the players Johnny played against in club and high school soccer.
Johnny had many self-defeating thoughts, “I’m not good enough, everyone is so much better than me.”
The lack of confidence showed in Johnny’s play on the field.
Johnny was tentative and made critical mistakes in his first collegiate game and was replaced at half-time.
As you can see by the previous example, confidence is absolutely necessary if you are to play to your potential.
When you under-perform, it is never a talent issue, it is a confidence problem.
Questioning your ability to play at the next level erodes your confidence, increases anxiety and makes focusing seem like an impossible task.
Conversely, a strong sense of confidence is what helps soccer players face challenges and raise their game to the next level.
Christian Pulisic is an 18-year-old midfielder playing on the U.S. national team. You might think a player so young would have difficulty playing against the greatest players in the world in international competition but that is not the case at all…
As the USMNT attempts to qualify for the World Cup, Pulisic has been the best player on the field during qualifying matches. Pulisic’s play on the field has been described as fearless, relentless, confident and tough and his production is top on the US team.
Pulisic has already scored seven goals for the United States, including four goals in a four-game span.
Bruce Arena, head coach of the USMNT, credits Pulisic’s strong sense of confidence as the reason for his impactful play on the big international stage.
ARENA: “[Pulisic] was called to man up, and he manned up. From what I could tell so far in his career, everything that’s been put in front of him, he’s been able to conquer. I think that’s a strong indication that this kid is going to be a special player.”
How has Pulisic been able to maintain such a high level of confidence playing against more experienced, older and stronger players?
Well, Pulisic doesn’t see his competition as better… Pulisic knows he has earned the right to play at this high level and he knows he belongs there.
PULISIC: “Everyone asks me questions about my age. It doesn’t matter anymore. We’re all at the same level.”
Tip for raising your soccer game at the next level:
Keep the focus on yourself and your talents, not others. There is a reason you moved up to a higher level of competition…
You earned the opportunity to play stronger competition because of your ability and hard work.
You can raise your game to the next level if you stay focused on the strength of your game and the reasons you have made as far as you have.

Learn all my mental game strategies for mental toughness in soccer with Soccer Confidence CD and workbook program:

“Our son plays academy level soccer. Jaki taught him how to focus on mini goals for each game and practice, how to lower his expectations and understand that mistakes are necessary to grow as a player, and helped his perfectionism. We saw a noticeable difference within one month with improvement each month thereafter. He was more confident, happy, and was having fun again at soccer. The confidence has helped him off the field as well to not have to be perfect in everything that he attempts. We can’t say enough about how grateful we are for Jaki!”
~Linda Black, Soccer Mom

“I wanted to let you know that in just a couple sessions with you, we are seeing a change in not only in our daughter, but the manner in which we handled things. I’m glad to see her starting to use skills that she once had in full force at her prior club as the “alpha dog,” if you will, but that have become dormant over the past 10 months. More importantly, I wanted you to know how much we appreciate what you are doing for our daughter.”
~David, Sports Dad 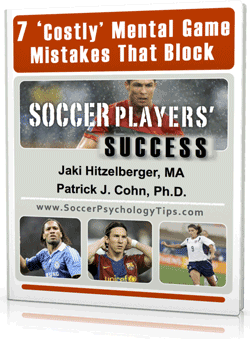 What are mental game subscribers saying?

“Michelle had the best weekend of soccer she has ever played.  I’m not just saying this because you have been working with her (I promise!). She was relaxed, did not get frustrated with herself or teammates, never once ‘shut down’ and actually smiled a couple of times. Numerous parents noticed a difference in her composure and attitude.  A college coach sent an email last night expressing interest–commenting on her level of play during the weekend. Thanks again for EVERYTHING…Michelle is in a very good place right now!”*
~Diana, Michelle’s Mother

“Adam is truly one of your success stories. We purchased the CD program for him last year around this time. He is a soccer goalie and needed more confidence. The change was dramatic and he still goes through the exercises before a big game.”*
~Stella Prevost