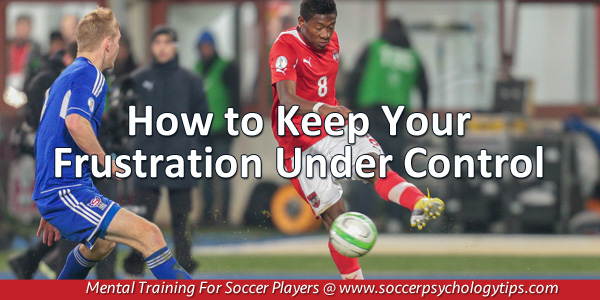 Frustration is the worst emotion you can have–if you want to perform well.

When frustrated, you might feel upset or annoyed over making mistakes, poor calls by officials, or making turnovers–with the thought that you lack the ability to change your situation or achieve your objectives.

Once you become frustrated, your game-time performance diminishes rapidly and, very often, are unable to get back in the right frame of mind to perform well.

Let’s examine how frustration can develop on the field…

Jose P. is the lead scorer and top player on his youth travel team.

Jose has tremendous ball skills and scores at least one goal per game.

The team relies heavily on Jose as the offense is run primarily through him.

One mid-season game, Jose had his worst game and was visibly frustrated through the majority of the game.

The opposing team double-teamed Jose from the starting whistle and was very physically aggressive when Jose touched the ball.

As the game progressed, Jose appeared to give less effort, waited for the ball to come to him, made several errant passes and committed two fouls out of frustration.

Even soccer players at the highest levels can succumb to frustration.

Christian Pulisic, 18, is the youngest U.S. player to start a World Cup qualifier and is the future of the USMNT.

Pulisic has scored 7 goals in 17 appearances for the USMNT.

In a fifth round World Cup Qualifier match against Costa Rica, Pulisic grew increasingly frustrated due to being double-teamed seemingly every time he touched the ball and experiencing a few aggressive tackles.

When Pulisic did get touches, he failed to make much of his opportunities.

ARENA: “[Pulisic] had a tough game today and obviously they paid a lot of attention to him. You could see early in the game, they always sent a second player to him. I think he got a little frustrated.”

USMNT captain Michael Bradley believes the key to prevent frustration from taking over your game is to stay focused, composed and relaxed no matter what the tactics of your opponents.

Your opponents will always seek to neutralize your strengths. If you allow the opposing team to upset you, you’ll be giving them an edge during the game.

Conversely, if you can remain unfazed and stay composed, your opponent’s game tactics will backfire and, most likely, cause them to become frustrated.

How to Keep Frustration in Check:

Learn all my mental game strategies for greater composure with Soccer Confidence audio and workbook program.

My son made a lot of progress. His focus has sharpened, and it has translated to his play on the field. His confidence continues to grow as he takes on defenders. There is definitely a tangible difference between how he used to play and how he plays now, and I believe it due in large part to your mental training program.”
– Lee, soccer parent

“We try and spend 20 to 30 minutes a day working on the mental aspects of the game. My daughter is really enjoying it and feels it has helped and I know it has worked for her mother and I. I think you need to open a branch up here in Detroit, Michigan because there are a lot of parents and kids up here that need this information. Keep up the good work!”*
~Scott Burgess

“Adam is truly one of your success stories. We purchased the CD program for him last year around this time. He is a soccer goalie and needed more confidence. The change was dramatic and he still goes through the exercises before a big game.”*
~Stella Prevost