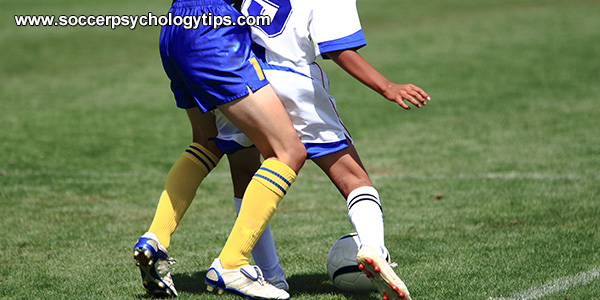 Improving Self-Confidence by Focusing on Yourself

Do you make comparisons to your teammates or opponents?

Are you afraid you don’t measure up to a teammate?

Does this also affect your focus during games?

A recent question from our readers asked:

“How can stop making comparisons so I can become a better team player? How can I mentally overcome this in the midst of a game?”

Many soccer players, and athletes in general struggle with comparison of themselves to their teammates or even opponents.

Some reasons you might make comparisons to other soccer players are:

If this sounds like you during games and practices, your self-respect may be compromised.

I worked with a young soccer player once who made the most elite team for his age. He was a great player, but continuously compared himself and his game to his teammates.

He played the same position for about five years. The coaches on his new team felt he was more suited for defense rather than offense. So, they changed his position at the start of the season.

This young player was good offensively; he played forward for the past five years.

He doubted his ability when switching to defense and started to compare himself to his teammates in the same position. These other guys had been on defense for about as long as he played offensively.

Naturally, he was behind them in specific skills and experience. Though, he wanted his teammates to respect him and acknowledge his efforts in the position change. Also, he wanted to play in games.

He began comparing his self and game to his teammates’ and lost all confidence and trust in his ability as a soccer player.

When you compare yourself to other soccer players, you can lose confidence when you don’t stack up.

Making comparisons hurts an athletes’ belief in their ability, and also the way they feel about their self in general.

When you make the assumption that you’re not as good as others, you put others on a pedestal above you.

One way to stop comparing yourself to teammates and opponents is to focus on your talents and strengths.

Also, you want to develop a proactive, stable self-confidence, one that doesn’t change with the situation.

In order to start developing this type of self-confidence, create confident self-talk phrases you can say to yourself when you notice you’re comparing.

Additionally, if you become distracted during games because you think you’re not doing as well as teammates, refocus quickly.

Recognize you’re focusing on others, tell yourself to let it go, and focus on the very next task in your game.

The only comparison you need as a soccer player is to yourself. If you’re 1% better each week, you’re on the path to YOUR success.

If you need help with maintaining confidence and letting go of distractions on the field, please check out our personal mental coaching programs…

My son made a lot of progress. His focus has sharpened, and it has translated to his play on the field. His confidence continues to grow as he takes on defenders. There is definitely a tangible difference between how he used to play and how he plays now, and I believe it due in large part to your mental training program.”
– Lee, soccer parent