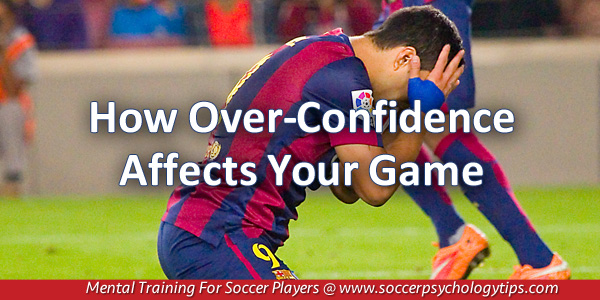 The Problems With Over-Confident Athletes

Confidence allows you to bounce back from mistakes.

Most of all, confidence pushes you to play to your capabilities. And what builds confidence is preparation.

Over-confidence has the opposite effect:

Tony G. is a goalkeeper for his Division II soccer team.

Tony’s team had not only won five straight games, but they gave up zero goals during that stretch of victories.

Tony felt indestructible in goal, so much so, take he stopped his routine pre-game preparation.

Tony didn’t warm up his body the same way he normally did and he did not aggressively attempt saves in the team’s shoot-around.

In a game against the cross town win-less rivals, Tony gave up a goal ten minutes into the game.

The goal should have been a routine save.

Five minutes later, Tony let in another goal when he froze on the shot.

Tony was pulled from the game after giving up another goal and his team ended up losing 4-0.

That is just how over-confidence affects performance…

When you are over-confident, you start out slow and allow the other team to believe they can win.

After you find yourself trailing in a game, you feel you can flip the switch but often you play at a frenetic pace which leads to under performance.

The US Men’s National Team suffered a devastating loss and elimination from the World Cup for the first time since 1986.

The US men’s national team needed only one point against Trinidad and Tobago to keep their World Cup dreams alive.

After a lackluster first half, the USMNT found themselves down 2-0 after the first half. The US squad only managed to score one goal in the second half and lost 2-1 and was ultimately knocked of the World Cup.

US midfielder, Paul Arriola, expressed his immense disappointment after being knocked out of the World Cup

ARRIOLA: “I still haven’t let it go. And I don’t think I ever will. No one wants to be that team that doesn’t qualify for the World Cup.”

Arriola pointed to over-confidence as the possible culprit for the loss.

ARRIOLA: “In the end, we had a horrible game in tough conditions, and maybe we went in overconfident, thinking we only had to get one point… Before the game, I don’t think any of us weren’t pumped up for what we were going to experience.”

When you are over-confident, not only do you neglect your physical preparation, you also neglect the mental preparation which is a prerequisite for success.

How to Keep from Becoming Over-Confident:

Understand that past performances do not guarantee results… Each game has new challenges.

You need to prepare for those challenges by maintaining the same level of preparation you have in the past.

You also must focus on competing at your best during the game in front of you.

Learn how to have stable confidence and focus with “Soccer Confidence”:

“Our son plays academy level soccer. He learned how to focus on goals for each game and practice and understand that mistakes are necessary to grow as a player, and helped his perfectionism. We saw a noticeable difference within one month with improvement each month thereafter. He was more confident, happy, and was having fun again at soccer.”
~Linda, Ryan’s Mother

You can work with us in Orlando, Florida or via Skype, FaceTime, or telephone. Call us toll free at 888-742-7225 or contact us for more information about the different coaching programs we offer!